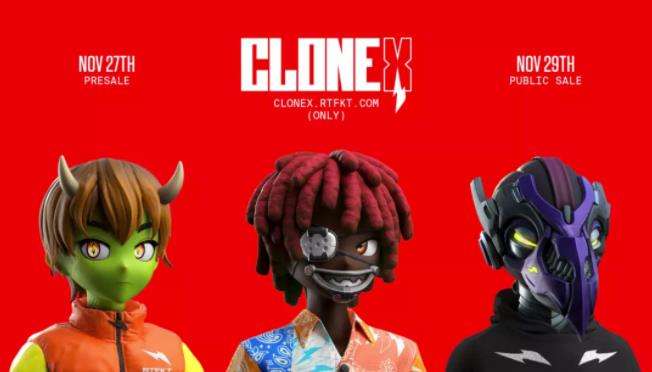 Before CloneX was released, it was cast on Times Square in New York. It is also a collaboration model launched with Japanese fashion master Takashi Murakami.

On the morning of December 1, RTFKT-CloneX successfully completed the NFT issuance and brought 15,000 ETH to RTFKT, which is approximately $66 million.

The highly successful RTFKT was established in January 2020. It is the first project to bring sneaker culture into the NFT field and has won the favor of many well-known investors. Such as the famous Silicon Valley venture capital fund Andreessen Horowitz, a16z, Riot Games (League of Legends developer) co-founder Marc Merrill, creative design aggregation platform Behance co-founder Scott Belsky, LVMH group’s former chief digital officer Ian Rogers and so on.

Someone once commented on RTFKT: “If you ever wanted a pair of AirJordan when you were young, then your child will dream of a pair of RTFKT”

The main products of RTFKT are all kinds of virtual fashion products, such as sports shoes, clothing and even slabs.

These virtual fashion products are designed by RTFKT using electronic game engines and augmented reality technology. There are many inspirations, such as video games, Tesla’s cars and so on.

According to data from the Fast Company website, consumers will spend more than $100 billion on virtual goods in 2020. And this number is expected to increase further in 2021.

“It may take a while for people to accept the concept of virtual fashion goods. But there are already a group of consumers who are willing to spend money on it. They value their avatars, and they are not all gamers. .”

But as the first NFT trendy brand RTFKT also faces many challenges. Within 2 hours of the launch of RTFKT-CloneX, the sales volume was less than one-third. Later, the official said it was due to a hacker attack, but this incident caused a lot of dissatisfaction among community users.

They think they made such an excuse only because they couldn’t sell it. Finally, RTFKT shut down the speech function of all Discord users for 16 hours.

The official expressed apologies. The remaining 1,000 CloneX will be given randomly as compensation to the buyers who participated in the Dutch auction the day before. However, users still believe that RTFKT has not dealt with the matter head-on, saying that they are still heartbroken.

The integration of NFT and street fashion

The emergence of NFT allows brands and users to achieve zero distance through the community. Users understand the brand better, but it also allows users to discover the shortcomings of the brand more quickly. After this incident, it is sufficient to prove that RTFKT is not yet mature.

As a brand-new business model, NFT trendy brands will surely occupy a whole world in the future. But now it still needs a long time of tempering.