How is the ecological development of the NFT project Loot? 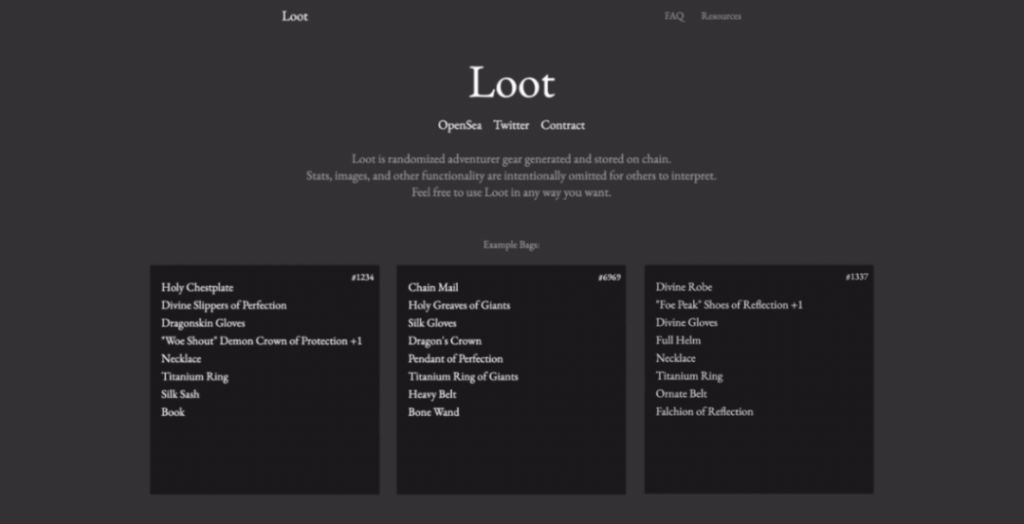 To say that the most popular project in the NFT field recently, it is none other than Loot. In just over a month, Loot has attracted the attention of even the entire industry ecology. Various capitals also entered the market one after another, which once set off a carnival in the NFT field. Many people already have a preliminary understanding of Loot. It is a text NFT and consists of 8000 Adventure Gears. Each NFT has different scarcity attributes.

Loot’s release method is also very interesting, the team did not charge collectors any casting fees. Loot packages are freely minted through its smart contract, and players can participate by paying a gas fee.

According to Nansen data:

Loot has established its own official website. Ecological existing projects can be inquired on the website. Interestingly, there is such a sentence on the official website. Loot is completely decentralized, so there are no official derivative projects, tokens or DAOs. It embodies Loot’s philosophy and spiritual value very well.

Loot’s extremely low circulation and high price have turned away many enthusiasts who want to join the Loot community. In this scenario, several projects that imitated the Loot concept emerged, such as Mloot and Rarity. Mloot is no different from Loot in design and form, but the circulation is much larger than Loot. Mloot is of great significance. Its larger circulation and lower prices have brought more people into the Loot community. The vast community is the basis for the formation of Loot consensus. Only when the value of Loot is understood and accepted by the public can the Loot ecology be continued. Rarity is a game created by Andre Cronje on Fantom, which borrows the “bottom-up” core of Loot. Rarity has set up 11 adventure characters, and the subsequent gameplay is completely designed by the player. Up to now, more than 4 million characters have been cast, with more than 170,000 holders. The rapid development of Rarity ecology shows the feasibility and unlimited potential of Loot philosophy.

Looking at the Loot ecology, in addition to imitation projects, there are already many Loot native projects under construction, which can be roughly divided into the following categories:

Although most of the Loot ecological projects are still in the initial stage, there are already many interesting ideas and designs. As stated on Loot’s official website, Loot is completely decentralized, and there is no official or unofficial distinction. The community should also uphold the concept of “openness and tolerance” to welcome new members and pay attention to the long-term development of the ecology, rather than focusing on the short-term benefits brought by high prices.

The uniqueness and value of Loot lies in its bottom-up ecological construction model, which is different from all other top-down centralized projects. When Loot was born, it was just some txt with white characters on a black background, which seemed not so easy to understand. However, from another perspective, this unrestricted form also gives Loot a broad imagination. Loot’s development path may be from a one-dimensional text, gradually evolving into a two-dimensional image, and finally to a 3D character image that can be used in games. This involves going through the community’s imagination and design process of Loot objects. Around the role of Loot, the community will build more applications, eventually forming a Loot meta-universe, Lootverse. From the ecological map, it is not difficult to find that Lootverse has a more obvious tendency to leap from one-dimensional space to two-dimensional space. Nowadays, many image design projects have appeared in the Loot ecosystem. The original flat abstract text is gradually vivid and concrete through the conception and processing of the community.

The emergence of Loot also makes Metaverse an important step from theory to reality. For the entire crypto field, Metaverse is no longer an unfamiliar concept. In the past 7th Shanghai Blockchain International Week, the most discussed topic was Metaverse. At present, Metaverse is still at a very early stage of exploration, and many people’s cognition of Metaverse is still at the level of games with cosmic elements. In the Lootverse ecosystem, there are only 8000 adventurers initially. This is just like in the early days of human beings, there is no city and no civilization, everything is barren, but there is also unlimited potential in barrenness. The world we see today is constantly created by the community. In Lootverse, people can also use unlimited imagination: creating social platforms, games, virtual cities and other diversified scenarios. Therefore, we believe that Loot/Lootverse is actually an important tool for the crypto world to move towards Metaverse as a whole.

The gap between ideal and reality

The inspiration that Loot brings to people is undeniable, but a truly successful project should not only have a spark of thinking, but should also continue to create value for the entire community. Today’s Loot boom is reminiscent of CryptoKitties, the veteran of chain games. In 2017, CryptoKitties was born on Ethereum. Set off a cat raising boom in the currency circle. Millions of dollars worth of Kitties have been traded. Cryptokitties is also the record holder of the highest single-day usage rate on Ethereum, which once accounted for more than 16% of Ethereum’s transaction traffic. As the first influential chain game in history, CryptoKitties expands the application of blockchain to the game field, which is a highlight in the history of blockchain and has far-reaching significance. Much like Loot, which is in full swing today, CryptoKitties triggered a heated discussion among many community members about the gamification of NFT. In fact, the founding team of Axie Infinity met each other in the Discord of CryptoKitties. They were discussing how to build an ecosystem around CryptoKitties and develop derivative games.

However, the smashing CryptoKitties also quickly went into decline. The main reasons are the following three points: 1. Excessive supply has caused the value of a single NFT to decline. 2. The game experience is poor and the design is too simple. 3. Game costs and revenue do not match.

First of all, is the completely decentralized development method really conducive to the construction of the Loot ecosystem? This is still a question mark. We believe that the guidance of a centralized force is still the most efficient way in the early construction of the project. The decentralized DAO is more suitable for projects in a relatively mature period. We see that the Loot ecological landscape is still relatively fragmented, and the projects are fighting each other, and they are not particularly closely connected. For example, LootSwag, Loot Character and HyperLoot, their adventurer images have their own characteristics, and did not form a unified standard. In fact, this has brought great difficulties to the construction and linkage of later games.

Secondly, the early development of Loot is very difficult, the design cost is high, but the economic benefits are lagging behind. There are two reasons: 1. Contrary to the excess supply of CryptoKitties, the total circulation of Loot is only 8,000, and the number of Loot holders is even smaller. 2. How to apply the underlying logic of Loot ecology to the game is a difficult problem to solve. A good game design should allow players to experience the thrill of changing from easy to difficult, constantly upgrading, and constantly challenging themselves. Just like World of Warcraft, from leaving the novice village penniless to collecting the Grand Marshal’s suit is a step-up process. The clever level design and linear expansion value are the precision gears that support the operation of this immersive virtual world. Once there is a slight deviation in the numerical design, the player’s game experience will easily fall into a vortex that is too difficult or too simple, which will eventually lead to the collapse of the worldview. The introduction of off-site assets like Loot will undoubtedly make the originally difficult game design even more difficult. Therefore, how to accurately design the game logic so that both high adventurers and relatively ordinary adventurers with rare abilities can get a silky game experience, which requires careful design by the developer.

Finally, the early casters of Loot are those with the greatest vested interests. They only need to pay a very small gas fee to get very high returns, which is unfair to the subsequent community participants. Taking Fantasy Westward Journey as an example, why is an extremely early game that has no players and its equipment can still be sold at a high price? This is because players need to buy some cards to play the game, and equipment is the value of money cost and player time cost. The high price of Loot does not match the contributions of the players in it, which is another issue that needs to be considered.